Planning along with good design may reduce the initial cost of constructing a water system considerably and minimize issues that should have been corrected during the planning and construction stages.  Correct design of a water well system can also greatly extend the operating life of the system.  There's is more involved in constructing a domestic water system than most people realize.

A solid water well system begins with a good water well location, some may suggest to through a hat in the air and drill where it lands... considered the "Vegas Method" of locating water, usually there's just one winner and it's NOT the hat thrower!  When drilling into a known sand or gravel aquifer this may not be an issue but generally in many areas that will not be the case and you will want to carefully locate the well where there is a good indication of water at perhaps a lesser depth.

Drilling of the well prior to construction of a home is WISE.  Once the well is installed with a water well report and completed water quality test then it's become much easy to design the actual water system and a lot of money can be saved during the construction phase by doing this ahead of time.

The price, sizing and design of the water pump installation and pressure system can easily be estimated. The water pump size will depend on the depth of the well, the maximum rate in gallons per minute (GPM) that a well can be pumped without aggressively lowering the water level in the borehole.

The Goal is Water and Balance 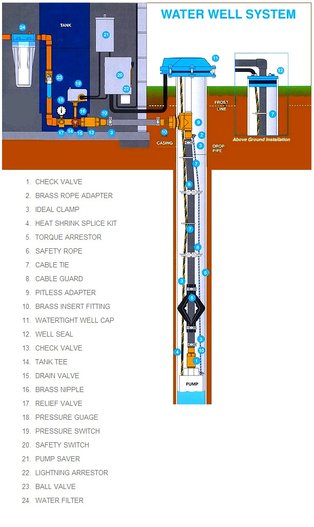 A good water well system should operate in a balanced state, this is why it all begins with a drilled well that is located where the water is and not where the water isn't.  It can be hard to create a balanced system with little water.  Although, even when all is done to properly locate a well, the yield of a well is never a guarantee... in some areas a low-yielding well is still a great well compared to a no-yielding well, it's all relative!

A Iow-yielding water well does not need to be a source of ongoing concern and expenses for a homeowner, it does become a matter of designing the system so that it may still operate with some sort of balance.  Low-yielding wells may also require simple changes in the habits of water-use so the the water supply is available for the peak demand periods.

Unstable home water systems that are not well thought often do not perform at an optimal level over the long term, even if the system initially seems to manage.

Issues can become ongoing and costly. If a water system ever becomes subject to a water well inspection upon the sale of a property it, will like come under the eye of someone with a lot of knowledge who will quickly determine the capacity of a water system.  A person inspecting a water system is not on the property to fail a system and needs to consider all that is reasonable.

The purpose of a water well system inspection is to bring the current operating status and details about a water system to a potential purchaser including water quality information and whatever else is deemed relevant at that time.

This is the reason why a vendor who is preparing their property for sale should have the water system information available along with all service information and prior water quality reports even though a new water quality test will be normally be performed by a potential purchaser.

When I was regularly inspecting water well systems on Vancouver Island and the Fraser Valley for many years, seldom would I request any voluntary information from the property owner other than relevant paperwork such as well logs etc.  Every water system has it's own story to tell and it's generally prepared to give up the information!

Many property owners will not want to disclose their known water well issues as water well problems can be a deal breaker in British Columbia, so you can see how important it is to have a winning water well team on your side.  It may make all the difference while you are not only residing on the property but it a water system often becomes a focal point at the time of a sale.

We had one property on Vancouver Island with a 17 million dollar offer in place, the purchaser had requested his representative arrange for a water well  system and groundwater water report to be written prior to completion of this sale, he wanted a full inspection.  I was contracted to conduct the study on this property which actually cost the owner roughly 65 million to build, but the real estate market was depressed, this was a highly-specialized property and after several years he was thrilled to finally have a 17 million dollar offer in hand!

I was fully informed of the situation and clearly understood the water requirements needed for the future intended use of this property.   The water system originally built to service the property completely fulfilled the needs of the vendor.  The system was extremely well constructed and maintained as you would imagine.  No expense was spared, like the rest of the property the water system was over built and beyond requirement as was currently used.

But, at the end of the day the owner lost the offer based on the report I prepared and the purchaser walked because the water system would not meet their plans.  The owner of the property fully understood and agreed with my findings, it was still very disappointing for all.  It always confuses me to see hundreds of thousands of dollars or even millions spent to build a home and there it sit with the most minimal water system possible.